Alternative Lending and the Regulatory Environment

Alternative lending entered the financial landscape little before the disastrous subprime crisis of 2008. It all started with Zopa, a UK-based lender who introduced the concept of peer-to-peer lending to the world. Zopa was then followed by US-based LendingClub and Prosper Marketplace in the year 2006. These alternative lending institutions offered more transparency, lower costs, and better efficiency, for the first time ever. They were a true boon to borrowers who needed quick financial assistance at better interest rates.

Although the model of alternative lending was a favorable one for all businesses, especially the small and medium businesses and individual borrowers, the financial crisis of 2008 created a major shift the financial and lending landscape in both the US and the world. Reform acts and regulatory frameworks such as the Dodd-Frank Wall Street Reform and Basel III international regulatory framework for banks, put large lending and financial institutions, under strict scrutiny. These regulations laid down stringent rules for mandatory capital reserves for banks and new underwriting requirements, which limited the amounts and kinds of loans, major banks could process and approve.

Thus, almost overnight, the world saw a major demand for monetary assistance go unheard and unanswered. There were demands for loans but not many suppliers who could service them; this was only until the burgeoning alternative lending institutions entered the non-bank lending scenario.

The Evolution of Alternative Lending

Non-bank lending has been in existence forever, however, their high-interest rates, unregulated models, and shady nature had made them the last resort for both individual and small business borrowers. For the latter, banks still made for a favorable choice due to their regulated and trusted nature. However, ever since the regulatory frameworks forced banks to lend only to borrowers with high creditworthiness, individual borrowers had no choice but to throng to the high-priced unregulated non-bank lending institutions. The arrival of the alternative lending market led to a sigh of relief for small-time borrowers, as the former promised better rates, faster loan approvals and processing, and seemed much more reliable than could be said for indigenous lenders.

Alternative lending industry’s journey of almost a decade is worth an applause. The industry saw many new lenders come into the picture, some major acquisitions, a few bankruptcies and yet it is alive and thriving, given its singular focus on innovation as a means to deliver maximum satisfaction to customers and in that way major business to the players in the industry. In fact, the year 2017 saw the maximum number of mergers, acquisitions and shutdowns in this industry, during this entire decade. 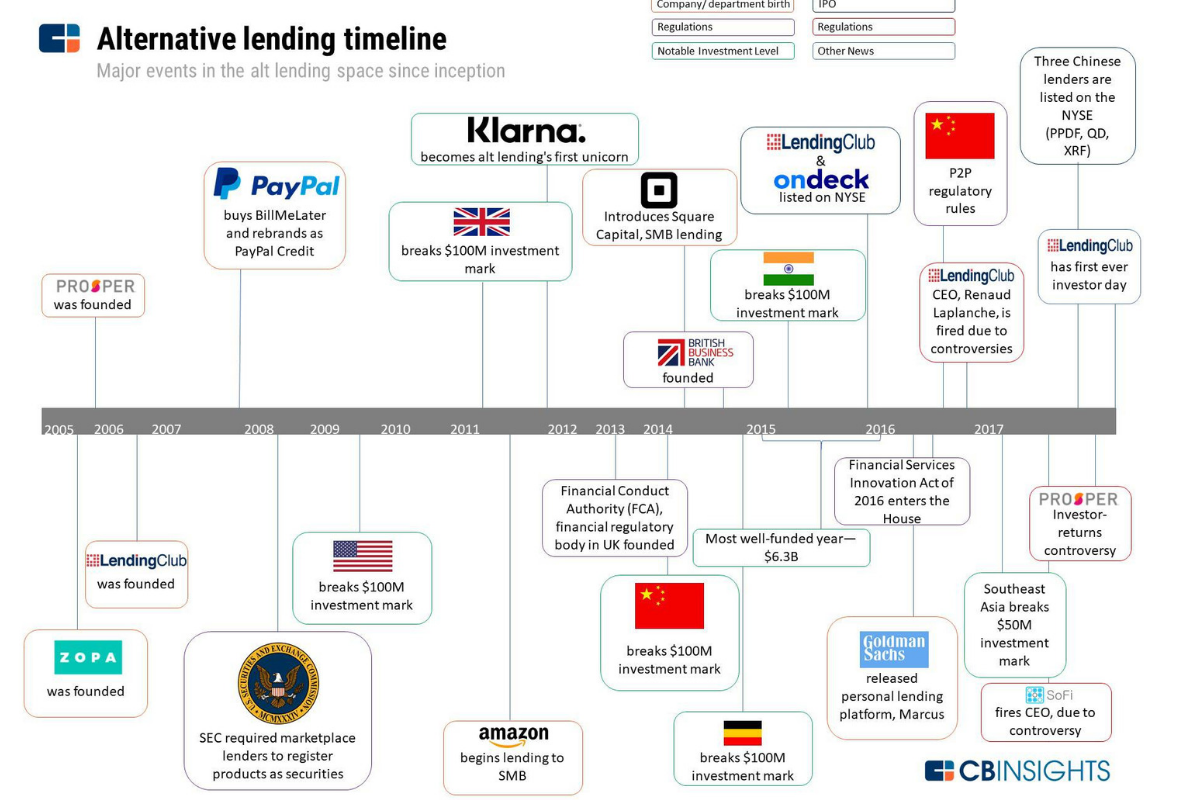 During the period of 2008-2016, the US, UK, China, Germany and India, respectively, broke the $100 Mn investment mark in the alternative lending sector. As regulations increased and banks came under the regulatory umbrella, they quickly started fleeing the small business loans market, leaving them to be serviced exclusively by the alternative lending market players.

While alternative lenders always have the option of charging a higher fee for supporting the risk profiles of small businesses and individual borrowers, they use their fintech innovation to cut down costs of underwriting and loan processing, thereby passing on the monetary benefit to the end consumer. Processes that took traditional banks 30, 60, and sometimes 90 days, took only a few minutes for alternative lenders, thanks to their fintech-backed operation models. This not only reduced loan origination costs but also was used as a major marketing technique to attract more customers to this industry. This also, has made alternative lenders, aka, peer-to-peer fintech lenders a major go-to point for SMBs and individuals, alike.

Also, the increased competition from fellow lenders in the space has made it easier for consumers to negotiate better rates than would have been possible if they were dealing with banks or unregulated, indigenous lenders. In 2017, approximately $380.6 Bn worth of loans were sanctioned to small and medium businesses and individual borrowers in the US. alone. This amount is expected to double to $750 Bn by 2020.

The scene of regulation and arbitrage in the alternative banking industry can be called nascent at the best. While hardcore bank regulations such as the Dodd-Frank Act or the Basel III regulations do not apply to these institutions, yet the rapidly increasing number of lenders in the industry and the amount of loan amount being injected to the economy by alternative lenders, hasn’t missed the sharp eyes of the regulatory bodies. Currently, the industry is using two different kinds of oversight:

It goes without saying that the industry prefers the former which gives it the leeway to act and expand as they would like. One of the examples of the alternative banking industry self-regulating itself, is the formation of the Innovative Lending Platform Association (ILPA) which is a trade organization formed by and for online lenders, dedicated to advance standard and best practices to help support responsible innovation for fintech lenders and also access to easy, stress-free capital for small business owners.

That being said, the major lenders in the alternative lending space are not the problem here, nor are they in need for major regulatory bodies to keep a check on their lending activities. However, there are a number of smaller, unscrupulous players who have infested the otherwise healthy alternative lending environment causing instances that threaten consumer protection and also the sanctity of the fintech-backed alternative lending industry.

If there was to be a regulatory body for this decade-old lending practice to be regulated then here are a few pointers which would make for a winning regulatory policy for both lenders and borrowers, operating in the alternative lending field:

•Less rigid liquidity requirements are a must here, as increased regulation in this area, though necessary, is what led to traditional banks exiting the small and medium loan origination activities and process loans to only big corporations, which are too big and well-established to fail. However, non-bank or alternative lenders are smaller as compared to traditional banks and not as exposed to global market variations and activities as the latter is, as such, they should be given more freedom when it comes to taking on risk profiles of a diverse set of consumers like small and medium businesses and individual borrowers. This will help alternative lenders serve more businesses and contribute to a thriving startup and SME culture.

•Increased transparency is something that should be included sans questions. It was the lack of transparency that caused the financial upheaval in 2008. Therefore, alternative or traditional, banks of all sorts must practice transparency of the highest standards when originating loans. Market conditions are mostly unpredictable making it further necessary for lenders, investors, and borrowers to study each other’s balance sheets and risk profiles to mitigate future risks. The non-bank lending space could benefit from this transparency as the industry is filled with a number of different business models, such as direct lenders, crowdfunding platforms, non-direct marketplace lenders among others, with each one practicing their own model of lending practices.

Finally, the prerogative of deciding on how the body of non-banking lenders is going to be regulated comes to the industry itself. If it does a good job at self-regulation, then government bodies might not set such heavy guidelines as discussed above. However, if the body of alternative lenders fail to come into mutual consensus and understanding of how to regulate its activities, governments of respective countries might feel the need to step in and form regulatory reforms, much like Dodd-Frank Act of 2010 and Basel III to protect consumer interests and ensure fair trade.